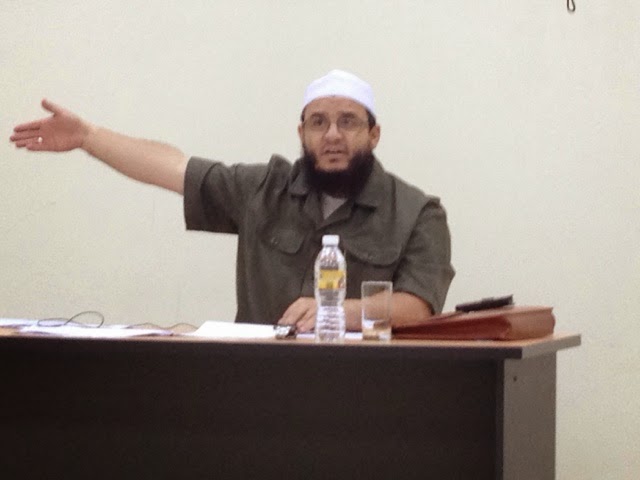 Signs of day of judgement

All minor signs that has been mentioned by Rasulullah SAW, has been witnessed

Now are the major signs are very near

Minor signs
1) Rasulullah
2) change from khalifah to monarch ( and in the end will change back to Khalifah)
3) spread of riba
4) changes of male to female & acknowledgement by Muslims eg pondan, Mak Andam  etc
5) high rise building

Is he mentioned in the Quran?
Yes but not in name
- Surah al-An'am 158 (the sign is the dajjal)
- once dajjal appear,( the major sign) the iman is off no use if you don't believe in Him before

Where is he?
- Fatimah bint Quwais narrated the hadith , she prayed behind Rasulullah & Rasulullah said, "sit down, don't leave, I have something to tell you. Sit at your place. I have no reason to call you except a Tamim Ad-dari (former nasrani) told me exactly what I have told you about dajjal. "

He (Tamim) went on a ship with 30 men from Lahm & Judain (tribes who lived near the sea). There was bad weather & they got lost 1 month in the sea.

Then they found an island near Maghribi. They went into the island & found new creation (hairy, they cannot recognise the face or the back), they ask what are you? They said "I am the spy of the island. I am a spy of something big. Follow me, there is someone waiting eagerly for news (cuffed at the hands/ feet/knees/ neck). "We thought it was the syaitan so we were scared. We asked is this syaitan? Albeit feeling scared, we followed as we needed water. "

They entered the place. They saw the biggest human body (huge), we have seen him chained from his neck & feet. We asked him what happened to you. He answered, you have known about me. You told me first who you are? We answered, we got lost & found this place. He asked does the spy (jassasah) brought you? We answered yes otherwise we wouldn't know where to find you

Then he said "Tell me about the palm tree of Bisan (this place with the best dates)".
Is it still giving fruit?

Dajjal: Very soon that land will not give fruit anymore

Then he said, tell me about the lake of Tabariah. Does it still have water?

Dajjal: Very soon it will lose the water ( the lake between Palestine & Jordan, drying 1 meter a year now)

Then he said," Tell me about the spring of Zuhr, does it still have water & people still use it for agriculture? "

Dajjal: Soon no more (now that spring has indeed dried up)

Then he asked:
"Tell me about the Rasul of the the ummi "

They (sahabah) said, " he was in Makkah & then moved to Yathrib "

Dajjal: Does the arab fought him?

Dajjal: Did he win or lose?

Then he said:
"If they (the arab) follow him, it's good for them" ( morale: even the enemy acknowledged Rasulullah)

- end of the hadith-

Note: it is not impossible for Dajjal to be of big size as people of Ad & Thamud were also big.

Makkah & Madinah is the only places Dajjal cannot enter.
Dajjal's Army - there will be war.
They will emerge, from the east of Makkah, sea of Iran.

We can read more in the book titled : Tribulation of the day of judgement (Fitnah-fitnah qiamat)

Hadith: He will come from Khurasan, a city called Marru from the community of Jewish - not a normal jewish as he claim he is a prophet , later he claimed he is God.
13,000 thousand women will follow him
70,000 of Jewish of Iran will follow them.

How does he impress people?
He use magicians (bomoh), saharah (magic)
He has a donkey - between the 2 ears is 40cm. (Huge) - doesn't listen except to him.
- note: like Shrek with donkey

He will enter each & every city. No city will take longer than 40 days for him to take over, he use black magic.
You can only defense from black magic with Al-Quran (recite them aloud)

Sign of Dajjal coming
- comet hailey (star with long tail that travels)
- rivers start drying up (no more water) even in Selangor!
- spread of famine & hunger
- dry out of Tabariah lake
- death of the land of Bisan

He will use black magic to convince people

Last note from Sheikh: People are not serious about religion nowadays
- can go for football match but not for Fajr prayers . Eg Kedah Vs Kelantan, the whole stadium will be filled but look at the masjid the following Fajr.

Allahu alam... May we take these reminders seriously... and prepare ourselves in shaa Allah...
Posted by Dr Aisyah at 03:02

Email ThisBlogThis!Share to TwitterShare to FacebookShare to Pinterest
Labels: draisyahafiz, signs of the judgement day, tazkirah